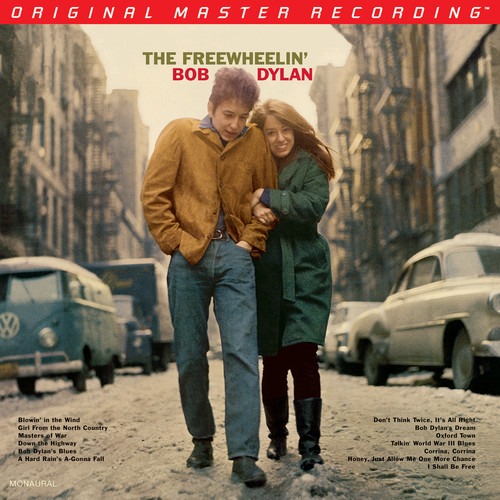 Limited Mobile Fidelity double 180gm vinyl LP edition of the mono version of this classic album pressed at 45RPM. Originally experienced by everyone in direct, attention-getting mono sound, The Freewheelin' Bob Dylan is the album the ignited sea changes in pop culture, music, songwriting, poetry, and the social consciousness. It's the creation of a 22-year-old visionary still years away from casting a jaundiced eye to the media. It's the sound of change, the feeling of ground shifting beneath one's feet, and the entrance of an entirely new way of thinking. It's the effective beginning of what's arguably the boldest career in music history, the yawning vortex into the complex mind, supernatural wordplay, and folk techniques of a vocalist/guitarist whose name is forever associated with transformation. Mobile Fidelity is humbled to have the privilege of mastering the iconic LP from the original master tapes, presenting it in it's original take-notice mono sound, and pressing it on 45RPM LPs at RTI. Strictly limited to 3,000 copies, the end result is the finest, most transparent mono analog edition of The Freewheelin' Bob Dylan ever produced. Never before has the resonance of his nylon guitar strings, fingerpicked notes, shivering harmonica fills, or plainspoken timbre possessed such directness, clarity, openness, body, or realism. As the preferred mix at the time of the recording, the mono version presents Dylan as he and his producers originally intended. More intimate, focused, and direct than it's stereo counterpart, the mono edition places Dylan's vocals in the heart of the musical action and as one with the accompaniment. It paints listeners an incredibly accurate portrait of the attention-getting, concrete mass of sound that features no artificial panning and straight-ahead immersion into the music. With the advantage of wider and deeper grooves, the 45RPM pressing affords the opportunity to detect more information and lavish in extra richness. Whether it's the exaggerated nasal accents employed on "Down the Highway" or the decay of each strummed line on the entirely acoustic album, previously concealed details, microdynamics, and ambient cues surface - enhancing the listeners' experience and taking them inside Columbia's Studio A.
back to top