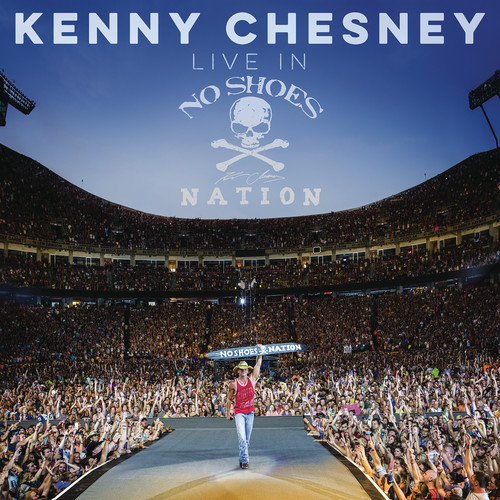 Two CD set. 2017 live release from the country music superstar. When Kenny pulled out some tapes to listen to his last 10 years of shows, he was immediately struck by the fervor of No Shoes Nation. And the more he listened, the more he wanted to share all these moments with the people who inspire him - and took the songs to a whole other level out on the road. Starting where Florida meets Alabama on the Gulf Coast, Live in No Shoes Nation kicks off with over 40,000 strong hearing "Flora-Bama" for the first time, then proceeds through obscure gems, massive hits and intriguing collaborations. For Kenny, it became a sonic document of all the fun, the moments, the rising and falling action of a million+ citizen place without borders: No Shoes Nation. Live in No Shoes Nation pulls rarely played jewels including "I'm Alive," "Coastal" and the deeply personal "Happy on the Hey Now," as well as locational homages to Guy Clark with "Hemingway's Whiskey" and Bruce Springsteen with "One Step Up." Beyond that, there's the high velocity good feelings that have defined Chesney's work. Stadium shows, pop-up bar gigs, amphitheaters and the occasional beach takeover; it's all here. As well as appearances by his friends, co-writers and tour-mates, ranging from Eric Church, Mac McAnally, David Lee Murphy, Old Dominion, Grace Potter, Taylor Swift and the Zac Brown Band. "No Shoes Nation not only knows no boundaries, we love all kinds of music," Chesney allows. "It's why Grace Potter is as loved as Eric Church, why David Lee Murphy gets the same response as Zac Brown and his guys. We love life, we love music and we all really love each other!"
back to top