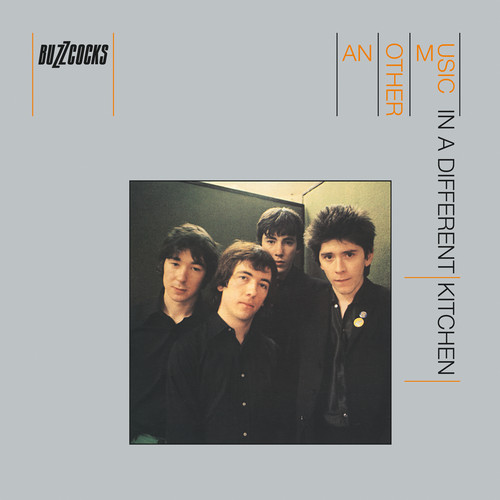 Another Music In A Different Kitchen [LP]
Artist: Buzzcocks
Format: Vinyl
New: Not in stock
Wish

Vinyl LP pressing. To mark the 40th anniversary of the original releases, Domino re-issues the Buzzcocks' seminal first two albums, Another Music In A Different Kitchen and Love Bites. Both records have been lovingly restored and re-mastered from the original ¼" tapes for the first time and come packaged in the original Malcolm Garrett designed sleeves with lavish 8-page booklets containing unseen images and extensive liner notes by famed writer, broadcaster, music journalist and cultural commentator Jon Savage. Faithful to their original track-listings, the re-issues see the albums released on deluxe vinyl for the first time in many years and follow the Domino re-releases of their debut EP, Spiral Scratch and Time's Up, a collection of demos, from 1976. Recorded at Olympic Studios in London between December 1977 and January 1978 with producer Martin Rushent and featuring the line-up of Pete Shelley (vocals/guitar), Steve Diggle (guitar/vocals), Steve Garvey (bass) and John Maher (drums), Another Music In A Different Kitchen was released in March 1978 and boasted a distinctive cover by Malcolm Garrett whose work would become inextricably linked with the band. By the end of 1978 not only had Buzzcocks established themselves as one of the leading-lights of punk but proved themselves as deft songwriters capable of producing three-minute-mini-masterpieces that would endure long after the initial spark of punk had faded.