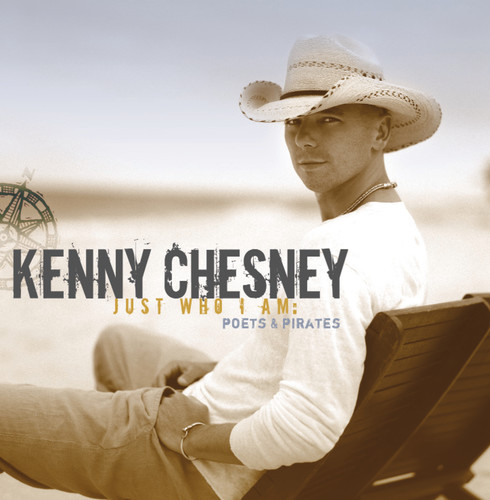 Just Who I Am: Poets and Pirates
Artist: Kenny Chesney
Format: CD
New: Not in stock
Wish

This is the brand new album from coutry phenomenon Kenny Chesney that features the new hit country single "Never Wanted Nothing More."

''Just Who I Am: Poets & Pirates'' is the twelfth studio album by country music artist Kenny Chesney. It was released in the United States on September 11, 2007. The CD was leaked on the Internet on September 5, 2007, almost a week before its release.

The album debuted at #3 on the Billboard 200 chart. In its first week, the album had the best weekly sales of any country album since the Dixie Chicks' ''Taking the Long Way'' in May 2006 and the album has sold 1.4 million copies in the U.S. up to August 2008.

The album's first two singles ("Never Wanted Nothing More" and "Don't Blink") both reached the top of the ''Billboard'' Hot Country Songs charts in 2007. "Shiftwork", which was a duet with George Strait was the album's third single, peaking at #2. "Better as a Memory", the fourth and final single, also reached Number One. Also included is "Wild Ride", a Joe Walsh duet which is a cover of a song by Dwight Yoakam from his 1992 album ''This Time''.

The album represented a move by Chesney to a more gulf and western sound with a number of "breezy, steel-drum island songs." - Wikipedia

Some of the more snarky popville pundits predicted that the former Mr. Zellweger would sneak up on 50 and Kanye to take the coveted title of Best-Selling 9/11 Album Ever (hmmm' something about that doesn't read all that well). Of course, the country studmuffin couldn't get all of his road dogs in a row to overtake hip-hop's finest, but we assume he'll survive. Just Who I Am pays homage to making lifelong friends on the road, living the "pirate" lifestyle. So your marriage to an Oscar-winning actress was annulled after four months due to "fraud," leading to mass speculation about your sexuality. It could be worse. And we say that because Kenny Chesney has sold approximately a zillion albums in the last decade. He could build an army of robo-RenĂes, or robo-Faiths or robo-Shanias, if he were so inclined. (Or robo-Orlandos. Whatever floats the boat.) Speaking of showbiz, if there's any doubt as to what Chesney's favorite film trilogy is, this album title sufficiently puts that to rest. Country's reigning stadium god likens his close friends and fans to pirates, whose "souls never leave the ocean or the lake or wherever they get away to." That's the loose theme of his latest, buoyed by the uplifting shanty "Never Wanted Nothing More." Sure, Johnny Depp's more of a Stones fan, but he's got to identify with Chesney-credos like No Shoes, No Shirt, No Problems.
back to top