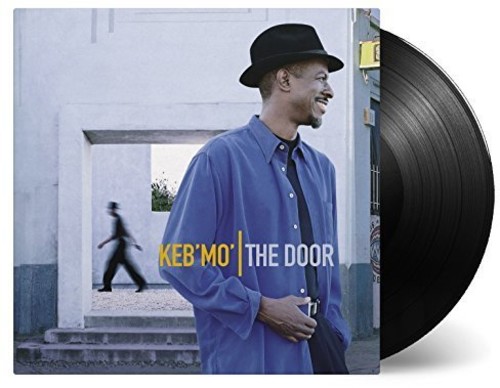 Limited 180 gram audiophile vinyl LP pressing including insert. First time on vinyl for this 2000 album! Few musicians can captivate with just their voice and guitar, but Keb'Mo' pulls it off on his fifth release The Door. It's as if DNA from Robert Johnson and James Taylor fused inside this singer/songwriter, simply known as Kevin Moore when he played guitar with Papa John Creach back in the 1970s. Keb'Mo' has paid his dues. More importantly, he is a compelling singer, a versatile stringman, and a fine songwriter. He is also one of the few best-selling artists today whose music genuinely deserves a big audience. Keb'Mo' has a knack for advancing the pure blues formula into uncharted territories. Take his remake of the Elmore James classic 'It Hurts Me Too'. It is nearly impossible to make a synthesizer work in a blues context, but Keb'Mo' finds a way on this track. On gentle numbers like 'Anyway' and sophisticated compositions such as the jazzy 'It's All Coming Back', Keb'Mo' also extends himself well beyond the blues.
back to top