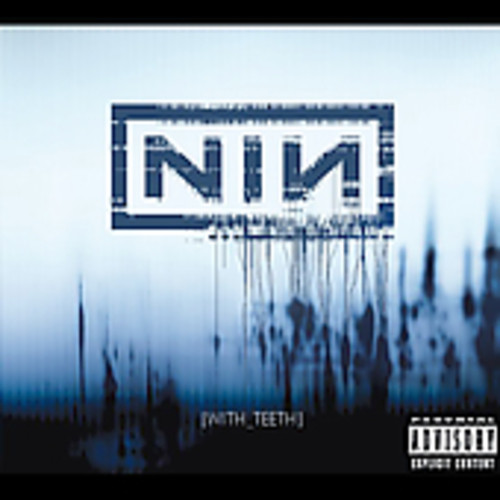 Rock superstars Nine Inch Nails are back with their latest offering WITH TEETH. This album is vocalists Trent Reznor's first fresh collection of studio material since 1999. This year we are set to see the re-emergence of a flawlessly modern influential act. Features the single "The Hand That Feeds."

''With Teeth'' (stylized ''WITH_TEETH'') is the fifth studio release by American industrial rock act Nine Inch Nails, released on May 3, 2005, by Interscope Records. The album was produced by Nine Inch Nails frontman Trent Reznor and long-time collaborator Alan Moulder. It was Reznor's first original studio album since ''The Fragile'', released in 1999. Reznor has indicated that the album is influenced by his battle with, and recovery from, alcoholism and substance abuse between albums.

''With Teeth'' became an immediate commercial success, debuting at number 1 on the Billboard 200 and selling more than 272,000 copies in its first week. The album generated three singles: "The Hand That Feeds", "Only", and "Every Day Is Exactly the Same", which all became number-one singles on ''Billboards Hot Modern Rock Tracks chart. - Wikipedia

There's a point on this record where Trent Reznor goes all Fishnets '89 on us, ranting "The tiniest little dot caught my eye and it turned out to be a scab!"-a clear reference to Pretty Hate Machine's dystopic "Down in It." Considering this album's similar scat-spat freakout ("Getting Smaller"), numerous Faint-approved death-by-disco hi-hat beatdowns ("The Hand That Feeds," "Only"), and a bitter, lonely dollop of "Something I Can Never Have"-style self-loathing ("All the Love in the World"), the aging ex-Goth cocktailer community should be tingling.

The only problem: Trent's looking less Fishnets '89 than McGwire '98 these days, and has spent his pre-press talking drug and alcohol recovery, which tends to sap, oh, just a little bit of psychosexuality off the ol' persona. (See: Velvet Revolver). So the never-stellar lyrics-far less misanthropic than the Broken/Downward Spiral days-reflect the internalized self-help gunk, which isn't very fun. Still, Trent tweaks his whole woe-is-me trip before it even begins, moaning "Sometimes I get so lonely I could..." then cleverly eschewing "die" to almost indifferently whisper, "Why do you get all the love in the world?" And hey, at least you can dance to Teeth (unlike The Fragile). Mud-moshing is so '94.