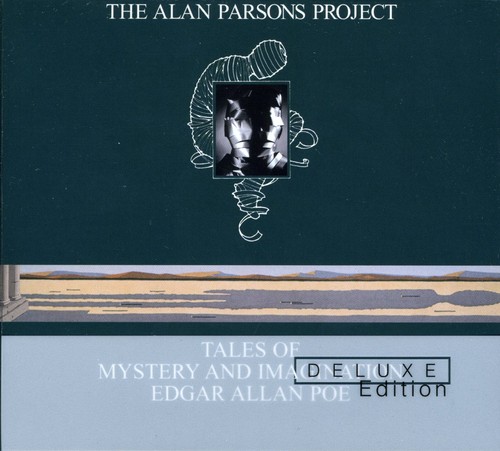 2007 digitally remastered two CD Deluxe Edition of the debut album from the Alan Parsons Project. Featuring the original 1976 mix of the album, the 1987 remix and eight previously unreleased bonus tracks! Recorded at Abbey Road in 1975 and released in 1976, the idea for the Project came from manager and writer Eric Woolfson, who saw his role as an auteur, bringing together some of the greatest talents in music to bring to life Poe's sinister, gothic tales. Enlisting the white-hot production whiz-kid Alan Parsons, fresh from his work with Wings and Pink Floyd, the duo set about making dreams reality. The album remains a singular, compelling work and can be seen as a bridge between Pink Floyd's Dark Side of the Moon and Jeff Wayne's War of the Worlds. Universal.

''Tales of Mystery and Imagination'' is the debut album by the progressive rock group The Alan Parsons Project, released in 1976. The album's avant-garde soundscapes kept it from being a blockbuster, but the interesting lyrical and musical themes -; retellings of horror stories and poetry by Edgar Allan Poe -; attracted a small audience. The title of the album is taken from a popular title for Poe's macabre tales of the same name, ''Tales of Mystery & Imagination'', first published in 1908 and many times since under this name. Critical reaction to the album was often mixed; for example, ''Rolling Stones Billy Altman concluded that it mostly failed at reproducing Poe's tension and macabre fear, ending by claiming that "devotees of Gothic literature will have to wait for someone with more of the macabre in their blood for a truer musical reading of Poe's often terrifying works".

This album was released in the U.K. originally with a different name. Simply called ''The Alan Parsons Project'', it was successful enough to achieve gold status but later that year the same album was released under the name of ''Tales of Mystery and Imagination''.

"The Raven" features actor Leonard Whiting on lead vocals, with Alan Parsons performing vocals through an EMI vocoder. According to the album's liner notes, "The Raven" was the first rock song ever to feature a digital vocoder.

The Prelude of "The Fall of the House of Usher", although uncredited, is based on the opera fragment "La chute de la maison Usher" by Claude Debussy which was composed in 1908-1917.

''Tales of Mystery and Imagination'' peaked at #38 on Billboard's Pop Albums chart. "(The System Of) Doctor Tarr And Professor Fether" peaked at #37 on the Pop Singles chart.

The original version of the album was available for several years on vinyl and cassette, but was not immediately available on CD. This was due in part to Parsons' desire to rework some tracks. In 1987, Parsons completely remixed the album, including additional guitar passages and narration (by Orson Welles) as well as updating the production style to include heavy reverb and the gated drum sound of the 80s. The CD notes that Welles never met Parsons or Eric Woolfson, but sent a tape to them of the performance shortly after the album was manufactured in 1976. In 1994 Mobile Fidelity Sound Lab (MFSL) released the original 1976 version on CD (UDCD-606), making the original available digitally for the first time. In 2007, a Deluxe Edition released by Universal Music included both the 1976 and the 1987 versions remastered by Alan Parsons during 2006 with eight additional bonus tracks. - Wikipedia