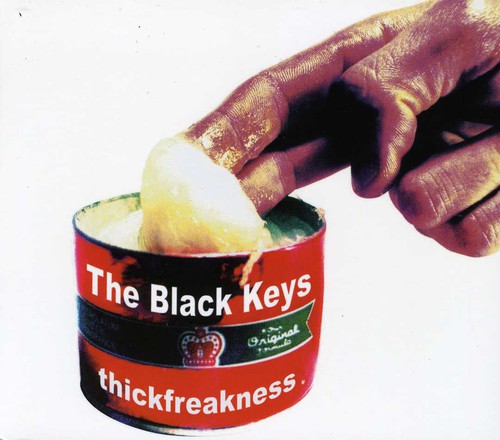 ''Thickfreakness'' is the second album by American blues-rock duo The Black Keys, released in 2003. It is their debut release for the Fat Possum record label. - Wikipedia

Four years ago, guitarist Dan Auerbach rode down to Oxford, Mississippi to spenda day playing with cantankerous blues legend T-Model Ford. He's been hookedon the blues ever since. Auerbach and his shaggy partner drummer Patrick Carneydon't have much of a pedigree, mind you, but the pair apprenticed by spreadingthe Mississippi juke joint gospel in the smoky bars and clubs dotting the Midwesternlandscape. A proper baptism be damned: the Black Keys play the Delta blues asinterpreted by their Fat Possum labelmates Mississippi Fred McDowell and JuniorKimbrough. The sound is dirty, raw-boned and surprisingly austere: Jon Spencernever understood the authority of the blues until R.L. Burnside stepped intothe picture to set him straight, but the Black Keys reach in deep and lodgethemselves directly in your gut.

Modesty has probably prevented Auerbach and Carney from aligning themselvescloser to the living legends, but this is some serious next-level mojo thatyou don't find with Spencer's tireless experimentalism or the painstakingforgeries of the North Mississippi Allstars. Auerbach's thick, haywireguitar work pushes the group's compositions to overzealous heights at times,but he puts his heart through the ringer on each of the eleven tracks. And bythe time they chew over Kimbrough's world-weary dirge "EverywhereI Go" mid-record, it's clear that the mixture of pain and pathos thatinforms the pair's own songs extends across arbitrary geographic, age andracial boundaries. Of course, the blues genre has always sported a wicked didacticstreak. "Gonna take your hand/ make you understand," growls Auerbachon the title track, wondering whether he wants to rock you gently or scare thebejeesus out of you.
back to top