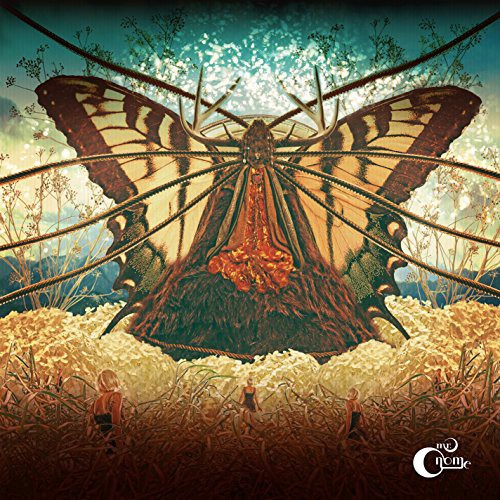 Following on the heels of 2011's critically acclaimed Madness In Miniature LP, Cleveland art-rock duo Mr. Gnome has returned with a soaring, shapeshifting new album. The Heart of a Dark Star is set for release on November 18th, 2014 on El Marko Records. Forging beauty out of chaos with their explosive fusing of widescreen concepts and surreal psychedelia since their inception, singer/guitarist Nicole Barille, and drummer/pianist Sam Meister return with the duo hitting an undeniably new energetic peak. Layered vocals, searing guitars, and driving rhythms transport the listener into another world -- or, quite literally into The Heart of a Dark Star or the 'belly of the beast' as they say -- which comes in and out of focus but never loses it's cinematic eye. In other words, Mr. Gnome is still very much operating in their conceptual wheelhouse, but this time their approach is leaner and the gut punches are swift. 'I read the phrase, 'The Heart of a Dark Star' in the Neil Gaiman book The Ocean at the End of the Lane,' Barille says. 'We had just finished mixing the record when I was reading this book, and this line jumped out at me and felt like it perfectly summed up the record as a pretty simple metaphor for the journey into the darkness of one's own mind. Really, the ultimate journey into the unknown. ' With spectral sounds swirling in and out of other-worldly themes, Mr. Gnome continue to build multiple bridges for it's fans and listeners that ultimately lead back to their dream-like, hypnotic realm of rock 'n roll. Mixed by engineer Kevin McMahon (Walkmen, Titus Andronicus, Swans, Real Estate), The Heart of a Dark Star represents the first time they have completely self-recorded an entire album. The band notes the fundamentally different approach in the discovery process this go around, from setting up mics in their home studio and recording the ideas as they came, to discovering the orchestration in an autonomous way without the ticking of a studio clock, and without any outside influences either way. Incredibly, Barille and Meister continue to keep their operation truly DIY. Encompassing the hyper-stylized videos they've come to be known for (specifically, the epic video short for 'House of Circles' featured by NPR and countless others), the fantasy-like imagery of each of their albums, the head-turning band photography and obviously, the inception of each album, Mr. Gnome has been praised by the likes of Rolling Stone (who named them a 'Band To Watch' in a 2011 spotlight review for Madness In Miniature), NPR, Paste, Esquire, Spin, Magnet, MTV, BUST Magazine, and countless others. They've created fans from around the world from constant touring, and for both their artistic integrity and it's ability to create undeniably original musical imagery highlighted by haunting lyrics, dynamic instrumentation, and soaring vocals. The end results is a world where melted rainbows are meant to be eaten, hills of gold lead the way, and shadowy beasts hide on the moon. Much like dark stars themselves, which are known to exist through the eclipsing of other stars, the band attempts to shed light on the beast inside us all. Mr. Gnome will be hitting the road this winter for an extended tour taking them across the US and back, giving fans a chance to see their now-mythical, high energy live show that too has seen countless accolades. DISCOGRAPHY: Echoes on the Ground EP (2005) Mr. Gnome (Self-Titled) EP (2006) Deliver this Creature LP (2008) Heave Yer Skeleton LP (2009) Tastes Like Magic B-Sides (2010) Madness in Miniature LP (2011) Softly Mad B-Sides (2012) The Heart of Dark Star LP (2014)