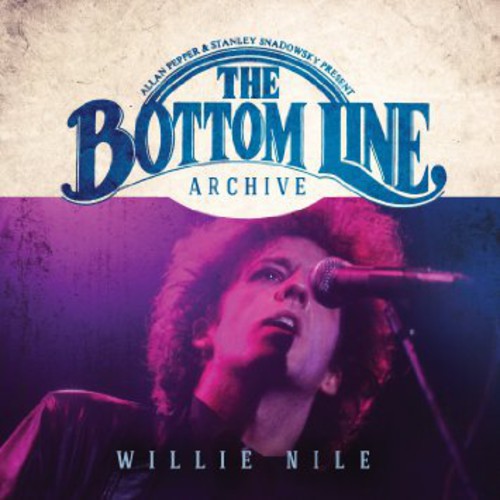 Willie Nile, The Bottom Line Archive 1980-2000, is two disc set, separated by a 20 year gap, and is a great example of Niles long term staying power, and the loyalty that Bottom Line owner/curator, Allan Pepper ( booker, or talent buyer does not suffice) extends to the artists that he really believes in. Exhibit A is this double-disc affair, highlighting two distinct eras in Nile s 35-year career. It is worth noting that one of the primary reasons we can enjoy the temporal contrasts contained in this collection is simply because, when Willie was ready to come back, Allan Pepper was just as ready to welcome him back to The Bottom Line. It was a second home for me, gushes Nile. Allan and the whole vibe of the club was so musician-friendly and warm. It was just the best place to play for that reason.

It s fair to portray these two sets of music as, Disc One: The Beginning, and Disc Two: The Comeback .

Disc One was recorded at Willie s first show in New York City, with a backing band (!) and was broadcast live on WNEW-FM, right on the heels of his debut release, which was receiving heavy airplay at the station. Such was the heat of his commodity that Nile went directly from this gig and a brief NorthEast tour, to being asked to be the opening act for The Who, on their upcoming US tour. At first, I thought it was a joke, explains Willie. When I realized they were not kidding around, I immediately said Yes! It was a dream come true, and a real learning experience. To go from playing solo on Bleecker Street, to playing in front of 20,000 people in an arena, within a few months time? That s a steep learning curve! The label was against me doing the Who tour, thinking we d be sliced to pieces by their fans. "But, in fact, were were welcomed, and went over really well. We got a standing ovation in Atlanta."

Surprising but true in 1980, when he got signed to record his self-titled debut album for Arista, Willie truly never had played with a band before. He had, however, honed his songwriting and performance skills by going out there and playing these songs, all by himself. When Mr.Nile put the band together for his first disc, he called on producer Roy Halee of Simon & Garfunkel fame and a band that included Jay Dee Daugherty the drummer for Patti Smith s band. Nile reflects, The guys came in, and were so patient and professional with me. They made making that first record easy. It was a great experience. "The band I toured with behind that was on fire and amazing and included Fred Smith, from Television, which was my favorite band back then."

Debut performances don t typically get broadcast over the radio, but WNEW-FM was there, as Willie s eponymous first disc was receiving lots of attention and getting heavy airplay at the station. He was a New York hero, and the energy was high. Luckily for us, the tape was rolling, and a dynamite performance was captured for future enjoyment. Willie recalls, That 1980 Bottom Line show is only my 3rd show ever with a band. I had a black eye that night which you can clearly see in that picture. A few days earlier, at the very first show, my guitar tech had accidentally poked me right in the eye with the body of the guitar. I had a huge shiner for days, including my appearance on Live at 5 on WNBC-TV, the day before the Bottom Line show. It was pretty funny." --The Bottom Line Archive

Shortly after his follow-up disc, Golden Down, was released Willie became completely disillusioned by the ugly dog-eat-dog mentality of the music industry. He walked away from the biz to raise his family in Buffalo. I never stopped writing, that whole time, explains Nile. I wrote hundreds of songs. I wrote everyday and still do. But I didn t see the point of going out and torturing myself, plus I was much happier raising my family. Though he recorded again during the 1990 s (this time for Columbia) Willie didn t make a full-on comeback until he took the reins and self-released Beautiful Wreck of The World (1999, River House). The combination of Willie s return to The Bottom Line, and the sheer power of that new album serve as quite the catalyst. Willie and band present a knockout January 2000 set - this time sharing a bill with Traffic-founder, Dave Mason. "My 2000 band was also amazing. They really got what I was doing and we had so much fun playing together that I started to enjoy myself and the music again. I've always been very lucky having great bands to play with in my career. Every band has been exceptional."

My 2000 band was so great, Willie remembers. These guys really got what I m about, and we had so much fun playing together that I started to enjoy myself and the music again. It comes through loud and clear as the boys bring a slamming set of Beautiful Wreck songs, a new version of Vagabond Moon (a kind of calling card for Nile), before leaving our heads ringing with a joyful romp through The Who s Substitute.

Make no mistake Willie is still at it - right this very now. In recent years, he s recorded eight new albums and continues to tour in the US and overseas both solo, and with rock band attached. As Willie puts it, "Since it was never the fame that I was after, it was always the love of the music and making a living doing it which drove me.

I just keep doing what I do, write songs, make records and play live, and now it's more enjoyable and satisfying than ever."

I went from being the hottest thing on the scene to having trouble getting people to return my calls. But since fame never mattered to me, I just keep doing what I do, and it all works out fine.

Frankly, we d expect nothing less.