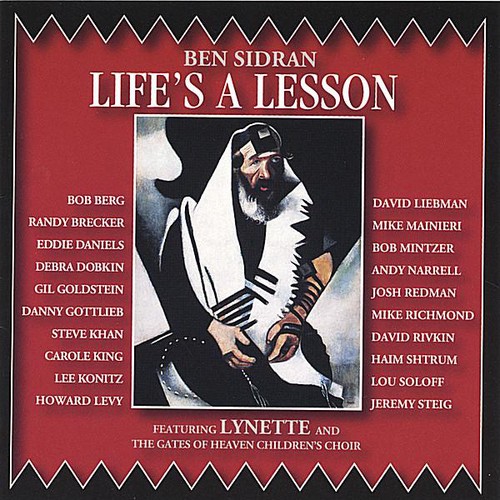 Los Angeles Times / Sunday, February 20, 1994 Jewish Folk with a Venerable Twist, by Leonard Feather This extraordinary album honors a tradition of Jewish music that goes back thousands of years. Most of the songs are sung in Hebrew, mainly by Lynette Margulies, with a couple written and performed in English by pianist - vocalist Sidran. His adaptations of the great cantorial settings are enlivened by the presence of 20 Jewish jazz musicians. Eddie Daniels' clarinet in 'Avinu Malchenu,' Lew Soloff's solemn trumpet on 'Kol Nidre,' the eerie sound of the shofar (ram's horn) by Miles Goldstein on the kiddingly titled 'Shofar Shogood' and Jeremy Steig's joyful flute on 'Tree of Life' are among the many moments that will appeal no less to Gentiles and agnostics than to Jews. The liner notes explain the stories of each piece. 'B'Rosh Hashana' celebrates the Jewish New Year; 'Ani Ma'amin' was sung by Jews in boxcars on the way extermination camps during the Holocaust. Sidran was moved to set words to the title song (originally an instrumental called 'Blue Daniel,' written by trombonist Frank Rosolino) when he learned that Rosolino had taken his own life. Sidran sings it along with Carol King. By addressing his own ethnic background, Sidran, whose 'Black Talk' monograph is the outstanding study of the African American musical heritage, has added yet another memorable note to a distinguished career as writer, producer, radio personality, singer and pianist.
back to top