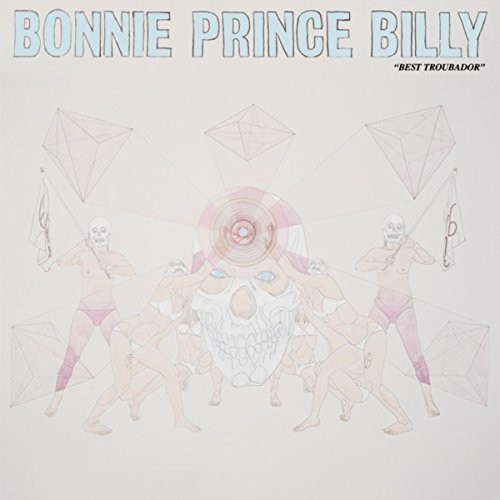 With Best Troubador, Bonnie 'Prince' Billy pays homage to a long-time and forever hero, the late Merle Haggard. A singer who, some 25 years previously, first performed in public by playing a Merle Haggard song, Bonny has often cited Merle's work in performance, on records and in conversation with anyone who was around, even talking to Merle himself for Filter magazine in 2009.

Merle's body of work was considered by Bonny for a record such as this for some time, but his passing in April of 2016 almost put a stop to it. The goal was to participate in the handing forward of the songs of a living legend, as Merle had done so many times in his own career. Writing for Juan and Only in 2012, Bonnie put it this way:

"Merle Haggard is a channeler who has paid ample tribute to those that came before him. He has demonstrated explicitly and implicitly his standing on the shoulders of Tommy Duncan/Bob Wills, Jimmie Rodgers, Floyd Tillman, Lefty Frizzell and many others. There are songs in his catalogue that seep solidly into the headspace of Kentuckians who grew up when I did, and beyond through his vast influence on the George Straits, Dwight Yoakams, Alan Jacksons, John Andersons, Toby Keiths, and too many others. He is not the original, but he may be the most significant junction."

With Merle gone, some of the impetus of the project was in peril. A plan to make the album in Nashville studios was abandoned. The songs still called to be played again, however - and so sessions were endeavored at home, capturing feeling, memory and new expression in familiar confines with the full-hearted playing and singing of the Bonafide United Musicians: Van Campbell, Nuala Kennedy, Danny Kiley, Drew Miller, Cheyenne Mize, and Chris Rodahoffer, with special guests Mary Feiock, Emmett Kelly, A.J. Roach and Matt Sweeney.

The songs sung on Best Troubador are pulled from all over - from Haggard's third album in 1967 through to his 47th in 2011 - but this is no simple hits compilation. Capable only of occupying a shared space between himself and Merle Haggard, Bonny chose personal favorites, singing the songs he wanted to sing, to find Merle and himself together in the music. Only two of Hag's thirty-eight (!) country number ones are included, and only two others that charted at all. Seven of the sixteen songs are from his later period, after his long run at the top of the country charts had ended, but before encroaching mortality could finally cease the singular and indefatigable creativity of Merle Haggard.

Best Troubador flips through his song book, landing on pages unmoored from their time and located anew. Moving from 1978 to 1969 to 2003 to 1981 allows the album to circle Haggard's music in a simulation of thought and memory, slipping around from spot to spot as if they were discrete impressions, unknown but knowable yet. Dedicated to new life and old, Best Troubador is wistful and bittersweet and no lament at all, but a tribute instead, for the triumph of a life spent in unending pursuit of the goal: new and expressive music, as our inspirations and heroes once sang it.