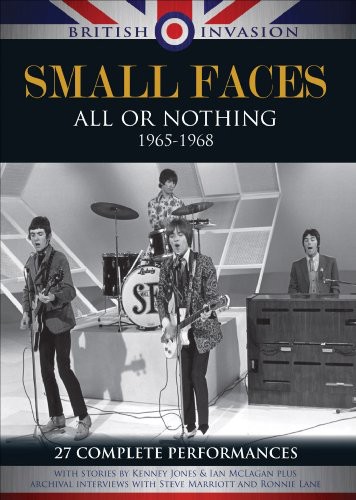 All or Nothing
Artist: Small Faces
Format: DVD
New: Not in stock
Wish

In the mid-1960's the Small Faces challenged the Who, Kinks, Rolling Stones and even the Beatles for UK chart domination. This is the band's first official anthology and features 27 complete performances capturing every aspect of their brief but brilliant run including early Mod/R&B classics such as "What'cha Gonna Do About It," "Sha La La La Lee" and "All Or Nothing," timeless rockers like "Tin Soldier" and later psychedelic treasures including "Itchycoo Park," and "Green Circles." Nine songs are included from the band's masterwork Ogden's Nut Gone Flake including "Lazy Sunday," "Song of a Baker," the title track and the six song "Happiness Stan" suite. Also included are interviews filmed exclusively for the DVD with original members Ian McLagan, Kenney Jones and Jimmy Winston as well as archival interviews with the late Steve Marriott and Ronnie Lane. The 24-page booklet includes an informative essay by pop historian Ken Sharp as well as rare in-studio photographs by famed engineer Eddie Kramer.