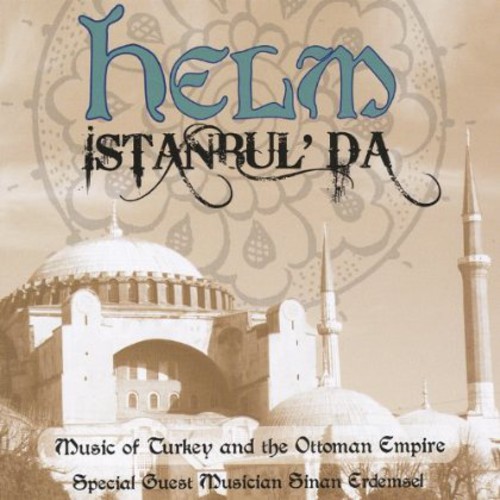 All Helm titles are now on sale for the month of April, 2013 at cdBaby, both physical and album downloads! Review by P. Anderson: 'Great mix and nice selection of pieces with top notch musicianship all the way around - this is a work of art!' In the fall of 2011 Helm traveled to Istanbul to record with their long time friend and Turkish music mentor, Sinan Erdemsel and with band member, Larry Klein, who moved there several years ago. Helm Istanbul'da includes classical music from the times of the Ottoman Empire, fasil or popular pieces, traditional songs from the Black Sea and Kurdish traditions, and Turkish Roman. Important contributors to our project include Mehmet Tarkan Yazicioglu on karadeniz kemenĂ§esi and Samuel Atchley on Turkish clarinet, Hakan AliĂ§ and Corwin Bell on vocals, and David Two Hawk on riqq. The Ottoman Empire lasted 623 years (1299-1922) and at one point stretched from Hungary to the Iranian border and from Algeria to Yemen, including Greater Syria or Shams. The cultural give and take was incredible and to this day are far reaching, especially musically. To round out Helm Istanbul'da, we've included selections from Jordan and Egypt, and we've also included a popular song from Afghanistan featuring Larry on Afghan rebab. While it doesn't exactly fit the album's theme, it is a great illustration of the following point: In over 600 years of existence, the many rulers of the Ottoman Empire knew better than to try and invade Afghanistan. We will soon be posting the lyric translations and more background on Helm Istanbul'da on our site.
back to top