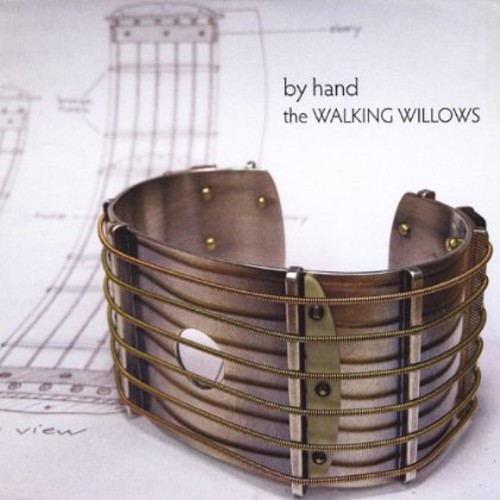 By Hand
Artist: The Walking Willows
Format: CD
New: Not in stock
Wish

'by hand', by the Walking Willows, has ten songs that stand alone and together as works of art. The Walking Willows are the new band of acoustic guitarist, vocalist, award winning songwriter and composer Stephen Cohen and double bass player, pianist, vocalist and arranger Rich Hinrichsen. They perform melodic, "emotionally gripping", creative acoustic music. The two started playing together in 2007, when Rich joined Stephen's legendary ensemble, the Tree People. The Tree People were a creative acoustic music ensemble originally formed in the late 1970's in Eugene, Oregon. Founding members are composer, songwriter, acoustic guitarist and vocalist Stephen Cohen, and Jeff Stier, who plays recorders, flute and percussion. They recorded two albums, The Tree People, in 1979, and Human Voices in 1984. The Tree People disbanded in the mid 1980's, but unknown to them at the time, the first two albums would later be discovered worldwide and be reissued by record companies in Japan and Spain, leading to a 3rd and last Tree People album, It's My Story being released by Guerssen Records of Spain in 2010. After the Tree People disbanded in the mid 1980's, founding member Stephen Cohen continued his music career, and moved to Portland, Oregon in the mid 1990's, continuing to develop his distinctive vocal and acoustic guitar style, composing music, writing songs, creating musical sculptural percussion instruments made out of metals, woods, and found objects, performing at concerts and festivals across the United States, including the Philadelphia Folk Festival, the Long Island Children's Museum and the Kerrville Folk Festival in Texas (where he was an award winner for songwriting in 2000), and doing musical workshops and residencies at museums and schools. He recorded three albums during that period, including his nationally acclaimed 2006 album for children and adults, Here Comes the Band. Meanwhile, the first Tree People album, originally released in vinyl and sold only in Eugene, Oregon, somehow appeared across the ocean, and was discovered worldwide by record collectors twenty five years after it was first recorded. Stephen was contacted by several record companies, leading to CD and vinyl reissues of the first two Tree People albums by record companies in Japan, Tiliqua, and Spain, Guerssen Records, and Stephen's solo acoustic guitar piece from the first album, The Tree People, 'No More School', was included in an acoustic guitar collection, Wayfaring Strangers, Guitar Soli, by the Chicago record company The Numero Group. The Tree People, whose original music was hard to classify the first time around, were now being called "Fathers of Freak Folk" and "Psych Folk Pioneers". And then the second life of the Tree People began. Stephen and Jeff, with new Tree People member, Seattle double bass player Rich Hinrichsen, began recording and performing again as the Tree People, leading to the release of CD and vinyl editions of a 3rd and last Tree People album, It's My Story by Guerssen Records of Spain in 2010. Jeff Stier retired from the group after playing on the new album and performing at the album release concert at the Old Church in Portland. Stephen and Rich did their last performance under the Tree People name on March 12th, 2011 at the Musiques Disperses Festival in Spain. Now, as the Walking Willows, (you might say an offshoot of the Tree People), Stephen Cohen and Rich Hinrichsen are creating, performing and recording new music (with a few Tree People songs thrown in for good measure). They have done three Creative Residencies at Centrum, an art organization in Port Townsend, Washington where Stephen and Rich created the Cistern Symphony, a music video and film created deep underground in the Dan Harpole Cistern in Fort Worden, where Centrum is located. A new Walking Willows album, "by hand" is being released in the fall of 2012. Regional and national performances are scheduled in 2012 and 2013 for the Walking Willows. The story continues!
back to top