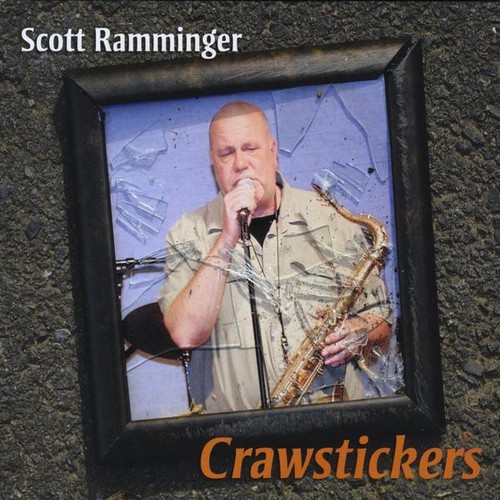 Scott Ramminger is a singer/songwriter/saxophonist based in the Washington DC area. His CD 'Crawstickers' features original Americana, blues, roots rock, N'awlins, funk, swing, and more. Nicely crafted, fun songs with solid grooves and a lot of reasons to smile along the way. In addition to Ramminger on vocals, tenor, bari, and alto saxes, the album features a great cast of musicians. Guitarist Dave Chappell is one of the top players in the Mid-Atlantic area. The same can be said for Baltimore keyboardist Brian Simms, who plays piano, electric piano, organ, and accordion on the disk. Drummer Pete Ragusa, whose infectious grooves propel the tunes, spent 30 plus years in The Nighthawks, perennial favorites on the blues circuit. Bass player Claude Arthur is a veteran of ex-Commander Cody guitarist Bill Kirchen's band, 'Too Much Fun.' Percussionist Josh Howell is a regular in the band of well known blues guitarist Tom Principato. Trumpeter Vince McCool is a fixture in the popular J Street Jumpers and many other bands. The disk also benefits from the vocals of two or the DC areas top female vocalists, Mary Ann Redmond and Patty Reese. In addition to serving up great backing vocals, the two each sing a duet with Ramminger. The material on the CD reflects Ramminger's diverse taste in music. 'I can't think of another CD that has one tune with accordion on it and another with a solo the that quotes a Sonny Rollins tune,' Ramminger notes. 'Crawstickers' are 'things that stick with someone, not always in a positive way,' he says. 'The thing you did 20 years ago that your wife still brings up when you get into a little argument.' Ramminger named his band The Crawstickers, and 'the tune just followed naturally.' The back cover of the CD and the disk itself feature a smashed up saxophone. 'I went to a lecture by Sonny Rollins a couple of years ago. He told a story about how he was practicing so much that one of his wives got mad and smashed up his horn. I thought -- wow -- if I made my wife really mad, that would be the ultimate. I had an old piece of a bari sax that was no good for anything. It was a strange brand and was missing many key parts. How I came to own it is too long a story to tell. But I decided to put it to work illustrating the concept of a Crawsticker. So it ultimately got recycled. . .'
back to top