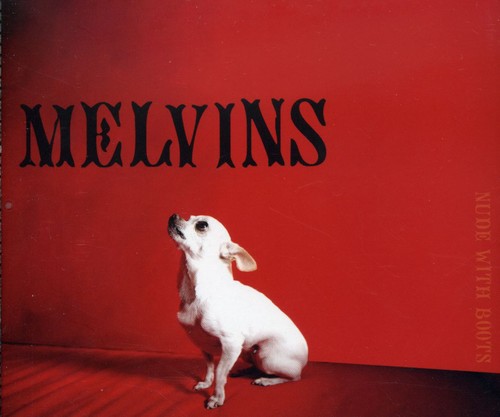 In 2006 the Melvins released SENILE ANIMAL, some 24 years after they started the band, one of the best received records of their career. The album marked the end of a revolving door of musicians with the very welcome annexation of Jared & Coady of Big Business. The refreshed quartet, now featuring double drummers, graced the cover of the cover of the Wire, received a 5/5 in Alternative Press, a 9/10 in Revolver and favorable comments from Pitchfork. Now the band returns with NUDE WITH BOOTS. Recorded in Los Angeles earlier this year, the eleven track album cements the resurgence of the Melvins.

It was strange, but ultimately natural that Melvins icons Buzz Osborne and Dale Crover hooked up with Seattle sludge two-piece Big Business (frontman Jared Warren and drummer Coady Wills) for 2006 behemoth (A) Senile Animal. Despite the age differential, the two camps share similar aesthetic affections for the blistering and bizarre. We're excited to see what the "lefty-righty" drum combo can accomplish with two additional years of practice together. In Stores July 8.
back to top