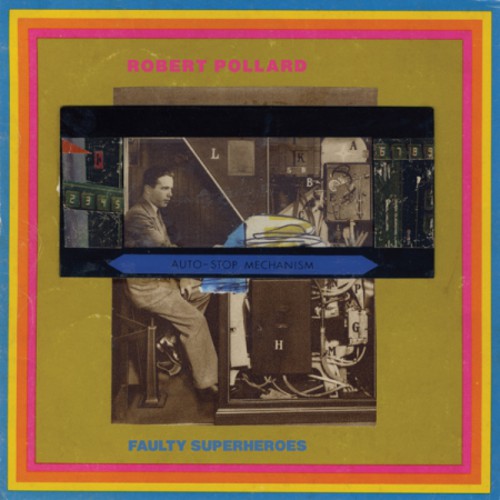 Neither snow nor rain nor heat nor gloom of night stays Robert Pollard from the swift completion of his latest brilliant record. Faulty Superheroes jets off Pollard s vinyl-grooved runway like the prototype for some new supersonic power pop fighter jet, and at this point in his career is anyone surprised that the twelve tracks on his latest effort are uniformly awesome? The answer is no. Exactly no one is surprised.

The biggest thing with which Pollard has to contend is his own miraculously consistent greatness. That he rarely if ever stumbles is some kind of marvel, and perhaps implies superpowers of his own. If you see what we did there. Faulty Superheroes has a tossed-off, effortless magnificence for which the rash of indie-whatevers trailing in his wake from Bee Thousand to the present constantly strive, and fail to achieve. The constant sense of surprise, of wonder, of discovery that one routinely finds in superbly structured instant bomp classics like Faster the Great is not something that can be taught, or learned, or imparted, or copied. Pollard largely abandoned the four-track 20 years ago and still gets tagged as lo-fi, which is a word that makes even less sense now in the days of digital recording than it did then in the days of occasionally tape-hiss smothered coulda-shoulda-been hits. Take Me to Yolita in lesser hands might not have been much more than a bad one-liner stretched to fit a pop song, but Pollard reverse-engineers the titular pun to build a Kinks-like mini-epic that elevates the raw material to transcendent heights. She walks to him but that s not him. Damn. And so it goes. Are there bum notes here and there? Recording-accidents-on-purpose left in like crushed empty beer cans strewn around the miniature, glimmering pop / rock / psych / prog construction sites left standing in the wake of each finished / unfinished songs? You betcha. The Guided By Voices aesthetic was formed and developed and continues to be improved by Pollard, which makes all the more puzzling the hand-wringing that accompanies every announcement of a so-called GBV break-up (or for that matter, reunion ). You only need one, he sings on the song of that title. As long as we have Bob, we need nothing else. And we have Bob. If you re counting your blessings, don t forget that one. It s kinda crucial.