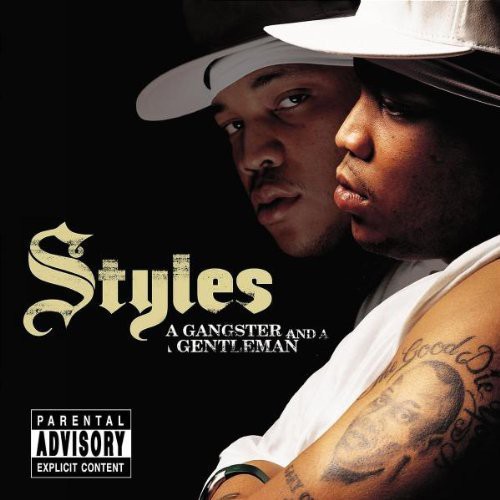 A Gangster and A Gentleman
Artist: Styles
Format: CD
New: Not in stock
Wish

Unleasing fire on his solo debut project, "A Gangs ter And a Gentleman," Styles drives skills so hard not even the strongest MC can break'em. Featuring guest appearances by Eve, Jadakiss, Sheek, M.O.P. Pharoahe Monch, Angie Stone, and Lil' Mo.

''A Gangster and a Gentleman'' is Yonkers, New York rapper Styles P's solo debut album after a series of two LOX albums and three Ruff Ryder volumes. Styles is the second to be debuted solo, after Jadakiss, and before the other member of the LOX, Sheek Louch.

Unlike his LOX homie Jadakiss, who made a flashy solo splash last year, Stylesis almost punishingly grim. In the Yonkers-based crew, he's always beenthe sneering, bad attitude-waving streetcorner thug to complement Sheek'sunhinged player and Jada's confident hustler. His solo turn could havetheoretically offered him a chance to diversify his portfolio, add a littlelevity and spice to his decidedly even view on life.

But Styles isn't interested in theory, only practice. A Gangster anda Gentleman is one of the most morose hip-hop albums to come along in quitesome time. The fact that it's been released on a major label is nothingshort of miraculous. Styles makes no compromises to the mainstream on his debut:not in the beats, not in the rhymes. The title track tells of a gruesome upbringingrevolving around abuse and crime. The drab realities of ghetto upbringing teemon this album. Even when he's trying to crack a joke-"Don'tyou ask me what I'm robbing you for/ 'Cause you was talking big money,and I'm a little broke/ And I'm a firm believer in equality, dog"-thesadness ekes through.

Furthermore, death is so present on this album that it's something of amiracle Styles saw it through to the end. "My Brother," on which Styleslaments the loss of his young sibling, is utterly moving. Also, when he toastssociety's underdogs on "Black Magic" and "My Niggas,"it becomes clear that Styles is a populist at heart. It's just that forthe people he represents, happy endings ring false.
back to top