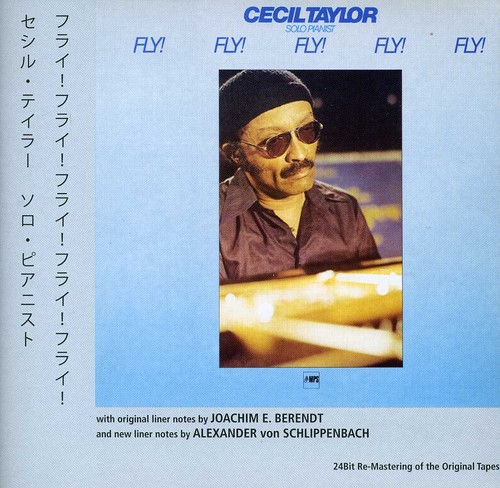 It would be far too limited to say the legacy of the MPS label only built on it's exquisite studio sound. Indeed, the "secret weapon" of the Black Forest team in many recordings was the BĂ¶sendorfer Imperial Grand piano. On Sunday, September 14th 1980 however, the BĂ¶sendorfer saw a definite moment of glory. With this recording, MPS added an otherworldly gem to it's impressive stack of solo piano outings. Without the intention of belittling the great releases by Oscar Peterson or George Shearing, "Fly! Fly! Fly! Fly! Fly!" has to be seen and listened to in a category of it's own. At this point of his long career Cecil Taylor had reached a level of expression which couldn't be measured by any comparison - since on the one hand the man had developed a completely unique style of playing and on the other embedded his art into a philosophy which was strongly nurtured on the history of such exotic cultures as Ethiopia, Mesopotamia and Tibet. "Fly! Fly! Fly! Fly! Fly!" is more than an album, it is a complex interplay between freedom, form and content. Freedom, as Taylor's recordings show, has nothing to do with arbitrariness. The real artist, as erratic his works seem to be from the outside, never loses track of the paramount order within. It is only then that he is able to "Fly! Fly! Fly! Fly! Fly!", as the artist wrote into Hans Georg Brunner-Schwer's guest book. And this is why - in the words of Alex von Schlippenbach - you can "breathe the air from another planet" by listening to Cecil Taylor. Unique vinyl-like cardboard packaging and re-mastering.
back to top