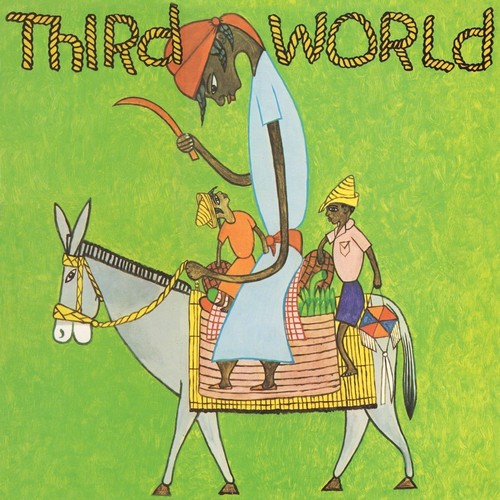 A most welcome re-issue that has not been available for some 23 years. Third World went on to find world-wide fame with their distinctive fusion of reggae, soul and disco, this remains my favourite album of theirs by far. '96 degrees in the shade' and 'journey to addis', both had great material thereon, but neither as strong in a pure roots style. So few reggae acts were a self contained 'band', as such, and this enabled them to find their sound, which would be further developed as they progressed. But, as a starting point, this is an essential reggae record. #credit, therefore to carolina records, who have released this on licence along with a number of other attractive titles by culture, burning spear and the heptones. The focus at the onset of the album is on covers of two of reggae's most iconic songs - the Abyssinians'Satta Amasa Gana' and Burning Spear's 'Slavery Days', and in each case they produce an excellent version, whilst stamping their own identity on the song. a brave opening, followed by the strong 'brand new beggar'. then follows the two least reggae-like tracks on show, the funky chant 'cross reference', and the soulful, mournful 'got to get along, which was, and still is my favourite track on here. #the record closes as strongly as it opens, with two belters, 'sun won't shine', and the sublime 'freedom song' (think a jamaican earth wind and fire). The disc is supplemented by a host of bonus tracks culled from the same period. #first up is the very first single 'Don't Cry on the Railroad Track' which is a kinda hurried sounding soul/roots mishmash, and while it's not bad, wouldn't have fitted onto the album. #much better is 'rainbow love', from where i don't know, but the funk/roots works well. #the remainder are all related to the album - a more inventive than you might expect dub of 'satta amasa gana, an alternative, but equally good take of 'slavery days', the same of 'got to get along' and three additional dubs in longform (all 5 mins plus) that are fairly unique in construction, and quite compelling in nature, excellent in fact. #the purpose of these, however is puzzling as no singles were released from the album (outside Jamaica at any rate), and they don't fit easily into the ideals of a sound system dub plate. This is turning into a classic year for reggae re-issues and 'lost' albums. Kudos to carolina records.