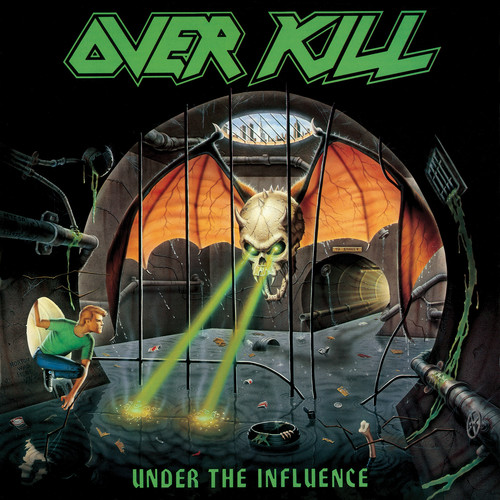 Special Deluxe Collector's Edition / Fully Remastered Audio / Features 'Shred', 'Hello From The Gutter' and 'Head First' / 16 page full color booklet - 3,500 word essay, enhanced artwork with previously unseen photos and new band interview. Whenever the term thrash metal is mentioned most people instinctively drawer a connection with the America West Coast and in particular San Francisco's Bay Area where the likes of Metallica, Megadeath and Exodus originated from. However, America's East Coast scene had, by the mid-80s, also developed a batch of acts lending support to such top notch acts as Anthrax, Testament and Nuclear Assault. Both scenes proved to be fertile breeding grounds for the genre acting as magnets for newer groups to form and feed off the excitement. Overkill, originating from New Jersey, was one such act throwing themselves into the ring at a time when anything in the world of thrash metal was possible. Signing to the much loved and influential Megaforce label they cut two well received albums prior to unleashing Under The Influence in July 1987. Recorded in upstate New York and produced by well-respected studio wizard Alex Perialas (mixed by Michael Wagener), who had already worked with Testament, Anthrax and Flotsam & Jetsam, the album refined the bands style and sound turning them from an interesting curio into world class contenders. Overkill's secret ingredient was not just their intense sonic assault but an inherent ability to condense riffs into an almost symphonic cacophony employing a strong melodic sensibility imbued with thick crunching guitar work. The songs resonate with muscle and melody, a trait not often found in the majority of thrash metal outfits, and the production is crisp and clean lending the sound a decidedly sophisticated sheen.
back to top