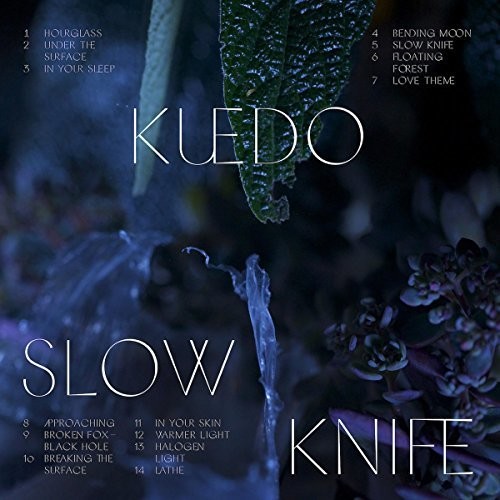 Kuedo returns to Planet Mu with his long awaited second album 'Slow Knife'. It's been five years since his acclaimed debut 'Severant' and time has proved it prescient; it's futuristic trap influence is now ubiquitous. 'Slow Knife' seems to return to where 'Severant' left off, but with the intricate sound design of last year's haunting EP 'Assertion Of A Surrounding Presence' subsumed into the compositions, making them more exacting and beautifully crafted. Between albums Kuedo has been working as a sound designer and composer for hire and the application of intent and widescreen rigour that commercial work requires has definitely found it's way into the new album. 'Slow Knife' has the subtlety, ambition and pacing of a brilliant soundtrack - a sense of an album of scenes, that easily lends itself to an impressionistic narrative. But, as with 'Severant', the title suggests relationship unease, with the slow knife being a metaphor for the building resentment in any close relationship. 'Slow Knife' is almost two albums; the first half, according to Kuedo, invokes the seduction of the city, taking the music of Michael Mann's 'Manhunter' as a cue, with the latter half being inspired by the bloody starscapes and voodoo wilderness of films such as 'Angel Heart', 'Night Of The Hunter' and more recently the 'True Detective' series. Both halves of the album are also in thrall to 'Ghost In The Shell' and Mica Levi's inspiring 'Under The Skin' soundtrack, especially in the turbulence of the mid-section. The songs of the albums first half are synthetic and seductive, a gelatinous veil with shades of the pseudo-sophisticated trance of Enigma, of all things, underpinned with dusky unsettling shadows and atmosphere. 'In Your Sleep', perhaps surprisingly, features the vocals of Hayden Thorpe from Wild Beasts, who settles his dark, whispered vocals into the moonlit shadowy atmosphere. 'Floating Forest' is the first track to allow back some of Kuedo's experimentation with the Southern rap template, which he explored before it became commonplace, with echoed drum splashes and a sinister repetitive motif, ending with a haunting growl. The second half of the album enters wilderness territory with 'Approaching's slow descending notes, before 'Broken Fox - Black Hole' throws the record into the cathartic darkness, as undulating chords play hide and seek with riotous reeds and scratchy strings grown from challenging collaborations with cello player Koenraad Ecker (of Lumisokea). 'Breaking The Surface' shivers and coils, before metal and strings dominate while 'In Your Skin' feels like being lost in a vast hinterland before 'Warmer Light' introduces some memories of sunshine, with it's plucked bassline and spiralling dub. 'Halogen Light' opens with the sound of crickets and a clear piano, cleansing the soul before 'Lathe' brings things down to earth with a short, yet powerful coda.
back to top