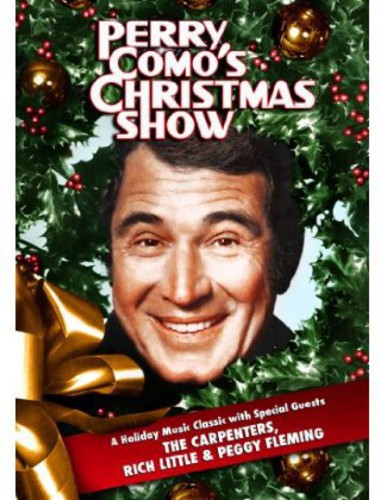 PERRY COMO'S CHRISTMAS SHOW from 1974 represents the beloved crooner's decades-long association with holiday television specials that entertained tens of millions of viewers from the 1950s through the 1990s. Unseen anywhere since it's one and only CBS-TV broadcast on December 17, 1974, PERRY COMO'S CHRISTMAS SHOW presents the host with special musical guests THE CARPENTERS along with Olympics skating star PEGGY FLEMMING and comedy great RICH LITTLE. Both PERRY COMO and THE CARPENTERS are embraced for their top-selling Christmas music and among the popular favorites featured on this colorful spectacular are "Have Yourself a Merry Little Christmas" (Como), "Toyland" (Como), "Santa Claus Is Coming to Town" (The Carpenters), "Sleep Well Little Children" (Como & Karen Carpenter) and "Carol of the Bells" (Richard Carpenter). Additionally, Perry and the Carpenters team for a medley of each other's million-selling hits, including "Close to You, " "It's Impossible, " "Yesterday Once More, " "And I Love You So" and "We've Only Just Begun." Peggy Fleming performs a beautifully choreographed ice skating production of "The Christmas Waltz" and the entire cast join together for "It's Beginning to Look a Lot Like Christmas" in a scene that recreates the Currier & Ives style Christmases of old. Perry closes the show with his elaborate "Story of Christmas" presentation, singing traditional carols "The First Noel, " "O Come All Ye Faithful" and "Silent Night, " followed by an encore with "O Holy Night." PERRY COMO'S CHRISTMAS SHOW is the type of old-fashioned, star-studded and lavishly-produced family TV special that gives viewers a warm, nostalgic glow at the holidays.