Double vinyl LP pressing including digital download. Vinyl LP pressing. Antipop is the sixth studio album by alt-rock band Primus, originally released on October 19, 1999. It was the band's final release before their hiatus from 2000 to 2003. It was also the last album with drummer Bryan Mantia. The album features several well-known guest musicians and producers, including Tom Waits, James Hetfield (of Metallica), Jim Martin (former member of Faith No More), Fred Durst (of Limp Bizkit) and Tom Morello (of Rage Against the Machine). The band has regarded the album's production as tense and uncomfortable, with the members of the band not getting along well with each other during recording. After the release of the album the band went on a three-year hiatus from 2000 to 2003. Claypool said "We went on a hiatus, which is a fancy way of saying we just didn't like being around each other and we wanted to break up but we didn't have the balls to actually break up. I think we stopped before we totally shit our pants, but I think the closest we came was doing the Antipop record, " While producing the song "Lacquer Head", Durst encouraged Primus to return to the more aggressive metal sound of their earlier albums Sailing the Seas of Cheese and Frizzle Fry for Antipop. Double vinyl LP pressing. Iridescence is the fourth studio album by collective Brockhampton. The album is their major-label debut and the first installment of their The Best Years of Our Lives trilogy. The self-produced album was recorded at Abbey Road Studios in London, as well as the group's own studio in Hawaii. Iridescence debuted at #1 on the US Billboard200 albums chart, becoming the group's first chart-topping album.

Double 180gm vinyl LP pressing. Deluxe 10th Anniversary pressing including three bonus tracks. Day & Age is the third studio album by American rock band The Killers. It was released on November 18, 2008, by Island Records. Frontman and lead vocalist Brandon Flowers stated that it is the band's "most playful record." As of May 2015, Day & Age has sold three million copies worldwide. Following the release of the album, the band embarked on the Day & Age World Tour. 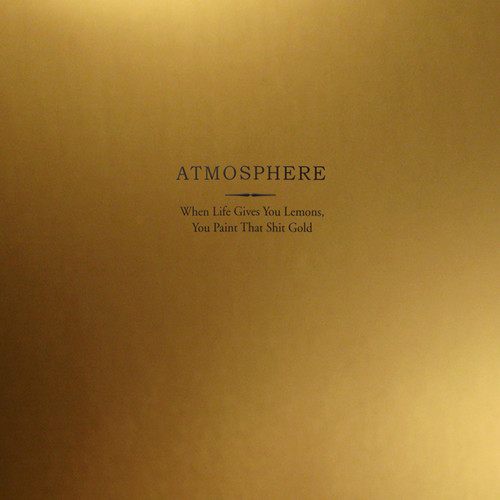 Limited double colored vinyl LP pressing with two bonus tracks and lemon scented LP labels. Includes digital download. Originally released in April 2008, When Life Gives You Lemons, You Paint That Shit Gold was met with critical acclaim, debuting at No. 5 on Billboard's Top 200 chart. By this time, Atmosphere had already grown into one of the most accomplished MC/producer duos in independent hip-hop, with a half-dozen official full-length albums under their belt, along with a dozen more limited tour albums, EPs, and various side projects. While Ant's ASR-born beats had grown increasingly melodic and musical, Slug's name had become synonymous with introspective raps, and together, they'd galvanized a faithful following. However, the thing that set When Life Gives You Lemons apart from previous releases was that it reflected a pivotal shift in Atmosphere's songwriting processes, where they transitioned from self-reflective to broadly narrative. Rather than expressing stories from their own POV, Lemons... was based entirely on fictional stories and characters, addressing societal issues at large, some of which revolved around themes of parenthood - perhaps foretelling of their future founding of "Dad Rap." The Decemberists - Traveling On EP - Capitol
With over 20M streams of their 8th studio recording I’ll Be Your Girl, The Decemberists release their acclaimed B-sides EP, Traveling On. The EP consists of 4 tracks from the IBYG boxset “Exploded Edition” now released for first time along with a full band version of “Traveling On” from I’ll Be your Girl. For over 17 years The Decemberists have reigned highly acclaimed, with more than 200M streams and 1.8M adjusted albums spanning worldwide. The Decemberists continue a tradition of releasing a post LP B-sides EP, with Traveling on, previous releases include Picaresqueties (2005), Connect Sets (2006), Long Live The King (2011) & Florasongs (2015). Lady Gaga - The Fame: 10th Anniversary [Limited Edition USB Stick] - Interscope Records
In celebration of the 10 year anniversary of Lady Gaga's explosive 2008 debut album, ‘The Fame,’ a special collectible product offering is being released this week. This limited-edition character USB, packaged in a custom display box, contains the original album, ‘The Fame,’ along with three bonus tracks, ‘The Fame Monster’ original album, both digital booklets, eight music videos, and an early EPK, filmed at the start of Lady Gaga's rapid ascent to stardom.