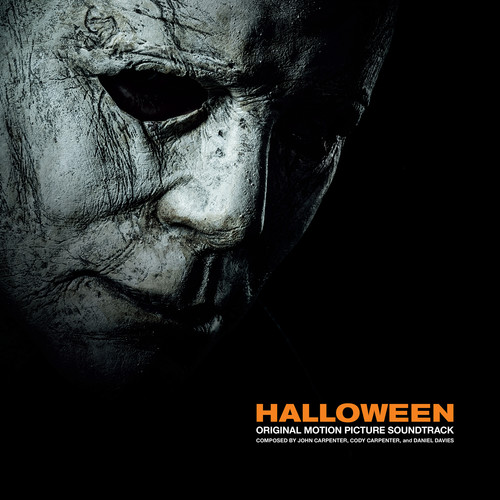 When the new Halloween movie hits theaters in October 2018, it will have the distinction of being the first film in the series with creator John Carpenter’s direct involvement since 1982’s Halloween III: Season of the Witch. Carpenter serves on the new David Gordon Green-directed installment as an executive producer, a creative consultant, and, thrillingly, as a soundtrack composer, alongside his collaborators from his three recent solo albums, Cody Carpenter and Daniel Davies.

The new soundtrack pays homage to the classic Halloween score that Carpenter composed and recorded in 1978, when he forever changed the course of horror cinema and synthesizer music with his low-budget masterpiece. Several new versions of the iconic main theme serve as the pulse of Green’s film, its familiar 5/4 refrain stabbing through the soundtrack like the Shape’s knife. The rest of the soundtrack is just as enthralling, incorporating everything from atmospheric synth whooshes to eerie piano-driven pieces to skittering electronic percussion. While the new score was made with a few more resources than Carpenter’s famously shoestring original, its musical spirit was preserved.

Unlike the Lost Themes albums, where the composers wrote the soundtracks for imaginary movies, Halloween saw the Carpenters and Davies collaborating on music set to images for the first time. Though it marked a significant change from their previous creative process, the trio thrived under the constraints and tight deadlines that film scoring work demands.

“Being limited by the length of time in scoring the sequence, we focused on the director’s tempo, timing, and vision,” Davies said. “He would tell us what he had in mind, how long the cue should be, what emotion he wanted, and we would take it from there. It’s only the three of us, there is no elaborate system. We wrote, performed, and orchestrated everything.

For John Carpenter, who reunited on the new film with original Halloween star Jamie Lee Curtis, composing the score felt like a homecoming. Not only had he not worked on a Halloween movie in 35 years, he hadn’t composed a soundtrack since his 2001 sci-fi thriller Ghosts of Mars.

“It was great,” Carpenter said of the experience. “It was transforming. It was not a movie I directed, so I had a lot of freedom in creating the score and getting into the director's head. I was proud to serve David Gordon Green’s vision.”

For Cody Carpenter, John’s son, and Davies, his godson, it was surreal to work on something that means so much to generations of fans, and that they grew up around.

“It was an honor for us to be involved, and we are really happy to be a part of something that so many people are anticipating and excited about,” Davies said. “Working together with both the director of the new Halloween and the creator of the original Halloween was really a fantastic experience.”

Greta Van Fleet - Anthem Of The Peaceful Army - Republic
Modern Rock N’ Roll band Greta Van Fleet to release highly anticipated new album, Anthem Of The Peaceful Army, on 10/19 via Lava Records. Album includes current single “When The Curtain Falls,” which is approaching top 5 airplay at Active Rock radio and is building at Alternative radio. They will re-launch their nearly sold out headlining tour on 9/11 in Canada. Greta Van Fleet recently set a record as the first band in 15 years to hit #1 airplay at Active Rock radio with 2 consecutive singles! Minus the Bear is a product of the first two decades of this century. From their first show in 2001 to their impending dissolution at the end of 2018, the Seattle band thrived on the musical awakening in the era of the mp3, the internet, poptimism, and the crosspollinations generated from an expanded consciousness of new music forms. With their final EP, Fair Enough, Minus the Bear closes the book on their hybrid of art-rock, indie pop, and warehouse party appeal. The opening track “Fair Enough” went through a variety of permutations before the band found new meaning in its lyrical lament of lost passions and finding “the exact moment we turned it off”. The other songs of Fair Enough are a continuation and culmination of Minus the Bear’s diverse sounds. The up-tempo drumbeats, lush electronics, and nimble guitar work that initially set them apart are on full display during “Viaduct”. “Dinosaur” has the groove of early hits of “Fine + 2 PTS”, but crafted with the understated Steely Dan-eque delivery of their more current slow jams. The EP closes with a nod to their ongoing remix collaborations, this time with a rave-up reinvention of “Invisible” by Sombear.

R.E.M. - The Best Of R.E.M. At The BBC [2LP] - Craft Recordings
R.E.M. grew up with the BBC, and this historic relationship is lovingly celebrated across an incredible collection that beautifully illustrates the career trajectory of one of modern music’s greatest bands. The collection—available as a super-deluxe edition 8-CD/1-DVD box set, as well as 2-CD, 2-LP and digital formats—comprises a treasure trove of rare and unreleased live and studio recordings culled from the BBC and band archives. This is a must-have collection for R.E.M. fans and an authoritative introduction for newcomers.

Buxton - Stay Out Late - New West Records
Stay Out Late is ultimately, the end result of understanding who we are, and more importantly, who we are not. This will be our 15th year as a band, and our 5th record overall. In the years preceding the making of this record, we all had to define what it meant for us to be happy making music. There are certain mechanisms and tropes we all fall into as a result. And as hard as we may try to emulate what we consider to be higher art, or rather, classic music; we always end up with a Buxton record. Sergio couldn't write for almost 2 years after 'Half A Native'. The answers to "why" had run dry. We all saw each other, hung out and everything was like normal. I can't really pinpoint the moment it all made sense again. The question had suddenly changed to "why not" and we were back in the studio making demos. There was a lurking sense that nobody would ever hear these songs, and that lead to a sort of creativity I'm not sure we'd really experienced before. All ideas were on the table, and more importantly they stayed on the table. There are a handful of truly great masterpieces and the attempt of achieving that is one of the most daunting and exhausting pursuits any artist can take on. In the van we're constantly educating ourselves and finding new and in many cases old points of inspiration. Whether it be Mark Hollis, HC McEntire, Mickey Newbury or rediscovering the genius of Bette Midler, we find ourselves at the mercy of our own limitations of expression. Yet somehow in our most vulnerable project, we're simultaneously the most comfortable in our skin as we've ever been. The core of this record is about being in it for the long haul, looking back, and being able to accept it all.  We can only hope that the listener can in some way share and make tangible the joy that went into making this record.